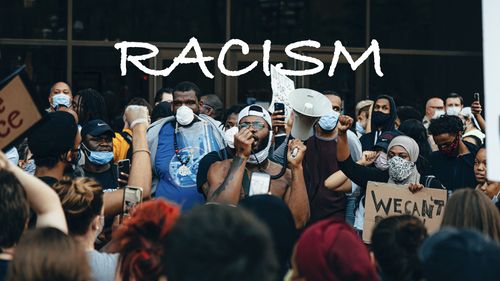 RACISM - noun
- prejudice, discrimination, or antagonism directed against a person or people on the basis of their membership of a particular racial or ethnic group, typically one that is a minority or marginalized:

From a very young age, I learned from that song that Jesus loves everybody - no matter what the colour of their skin or where they live in the world or the language they speak. And those root messages shaped my lifetime of thinking and acting. I am thankful for parents and a church that lived out Christ's love message before me. For me, it caused me as just a teenager, to spend part of my summer working in a camp for disadvantaged inner city kids and teens - all of them black, the vast majority of the camp staff was black, the counsellor I worked under was black, in fact there were less than ten in that whole camp whose skin was like mine. It was a rare and great experience. I have endeavoured my entire life to rebuke racism in any form, shun acquaintances that revealed racist tendencies, walk out on ethnic jokes or comments, and treat everyone I meet as my equal. I believe God knew I would thrive in planting and pastoring a church where for 38 years, my family and I have been in the racial "minority". I love it, I love the people I serve, and I love the Saviour Who "loves the little children, all the children of the world."

Having grown up in the USA, in a big city, I am familiar with race riots and the damage they do to everyone involved. I have sat on my porch on a hot summer night and watched the sky glow orange from the fires burning just south of us in Detroit. I had hoped those days of violence were over, but such is not the case. I have said many times in teaching sessions that "Racism is not dead, and it is more than just a 'black' issue. Racism can be found rooted deep in every culture. The reason it is found is because it is a sin problem based on pride and the despising of those who are different than us." The Bible does not disguise racism, but reveals its serious nature: Jew against Gentile, Gentile against Jew, Gentile against Gentile, Jew against Jew - all recorded for us without varnish or coverup. And this is why the story of the early churches in the book of Acts is so exciting to read. Why? because the grace of God worked in the hearts of those who were coming to faith in Christ and the old, entrenched attitudes and divisions began to give way to oneness in Jesus Christ.

Ephesians 2:14-16  For he is our peace, who hath made both one, and hath broken down the middle wall of partition between us;  15  Having abolished in his flesh the enmity…for to make in himself of twain one new man, so making peace;  16  And that he might reconcile both unto God in one body by the cross… Hallelujah!

Racism is just plain wrong and it should grieve the heart of every human being but especially of every child of God. So what are we to do in the face of the difficult and distressing times in which we find ourselves right now?

Second, we should be clear to let others know that racism is not a Christian value and should not be acceptable at any level.

And third, we should support those who are genuinely being affected by racism in their community and look for ways to encourage them and their "cause" while being discerning about those who seek only to use the "racism card" to further other agendas.

I was challenged by a pastor friend who emailed about his decision to put together a formal church statement on racism. I thought it was a good, well thought out decision and have decided it would be wise for me as pastor to speak on behalf of Greater Vancouver Baptist Church. Please take a moment to read the following statement. (Because it was so well done, I did use a good bit from what my friend articulated on behalf of his church.)

"The Bible tells us in Acts 17:26 that God… "hath made of one blood all nations of men for to dwell on all the face of the earth." (BTW, Genetic research reveals, we are all one "race.") Later, in Romans 10:12 God tells us that "there is no difference between the Jew and the Greek…" It is very plain from God’s Word that He created all people to be equal in every way. Therefore, Greater Vancouver Baptist Church is opposed to racism in any form. We believe that racism must stop, and that each of us can play a part in bringing that to pass. The fact is, black lives matter because all lives matter. But we can't honestly say that "all lives matter" until we treat others in a way that shows their lives really do matter to us. Sadly, as a society, and sometimes even as churches, we can fall short of that. As human beings, we are all created by God in His image - Genesis 1:27. So we must conclude that racism in any form is sinful and goes against God's creation and God's command to love one another - John 15:17. Rather than be a part of the problem, let us endeavour to be a part of the solution. Let us bear one another's burdens, have compassion on all people and let us show forth the love of Christ. "Red and yellow, black and white. They are precious in His sight. Jesus loves the little children of the world."

2020
March
Lessons from a VirusEnd of the Month!
April
God's Time for MeGiving to the Lord in a Pandemic
May
Pressing On
June
Our World Is a Broken WorldRACISM